Dear All, because of the current situation activities of our network are suspended. Thank you for your understanding. Best regards, Federico Gobbo

In May 2018 we will host the third edition of the CLOW series conferences, devoted to contestedness in European languages. Please check the official web site for more information.

Programme PhD and young scholars forum 24th of May

See here for the full program of the conference (in English).

For all people interested, the program of the conference on the Politics of Multilingualism is now available on line.

International Colloquium on “Language Skills for Economic and Social Inclusion”

This conference aims at exploring the relationship between individual language skills and people’s integration in the economy and in society in general with a special focus on the labour market. Language skills can be viewed as human capital having a positive influence on people’s income, employability and social inclusion. This holds for immigrants, refugees and mobile people who can benefit from the knowledge of the official language(s) of the host country, but also for citizens learning foreign languages and using them in the workplace.

Learning foreign or second languages has for a long time been associated with openness to other cultures. In recent decades, nevertheless, the discourse on language learning has gradually changed. Language skills are viewed as part of individuals’ human capital that can contribute to their economic welfare, increase productivity and foster growth. At the same time, language learning can promote social inclusion. As a result of recent massive migration flows to Europe both the Council of Europe and the EU have emphasised the importance of language skills for the economic and social integration of migrants and refugees.

There are some sound economic reasons behind these claims. Being a particular form of human capital, language skills may have a positive effect of the economic and social inclusion of individuals in different ways. Language skills in the official language of the host country may have a positive impact on immigrants’ income, measured in terms of earning differentials; foreign language skills may be associated with a higher employability, and with a lower probability of being dismissed when the costs of the workforce increase. Language skills, therefore, may facilitate the participation and the inclusion in the labour market, higher earnings and the possibilities of finding a job or holding it. Language skills can also promote a better inclusion in society. Employment, in fact, is one central aspect of inclusion.

Languages are necessary (although not sufficient) for social inclusion and cohesion. The Social Policy and Development Division of the United Nations defines Social inclusion as the process by which people resident in a given territory, regardless of their background, can achieve their full potential in life. This, of course, includes the economic life of individuals, without neglecting other social and political aspects. Social cohesion is a related concept that can be defined as a feature of a society in which all groups have a sense of belonging, participation, inclusion, recognition and legitimacy. This requires, among other things, avoiding the emergence of “parallel communities” that are divided (or even segregated) by language barriers within a given society.

Language policy can contribute to avoiding exclusion and segregation by promoting the linguistic integration of refugees and migrants, also in the labour market, and by fostering foreign language learning for mobile people who wish to spend a shorter or longer period of their lives abroad (e.g. international students). Language skills facilitate inclusion and cohesion because, among other things, they increase the capability of citizens and migrants to understand and communicate with the other members of society. It facilitates the access to (higher) education, which plays a key role in the development of an individual’s human capital.

The number of potential research questions that are relevant for the conference is large. Here we present a non-exhaustive list that can help orienting prospective participants:

The participation fee is €150 until 1 September and then €200. It includes four coffee breaks, two lunches and the social dinner on Thursday 12th October.

The participation fee for students of Humboldt-Universität is €50,-.

It is possible to pay either by bank transfer or by Paypal.

The length of abstracts should not exceed 350 words. Abstracts must be submitted to the address “templito@hu-berlin.de” by 15 May 2017. The successful applicants will be notified by 30 June 2017.

You can send abstracts in English, Esperanto, French, German, Italian, Spanish, or Swedish.

With the kind support of

In collaboration with the International Political Science Organisation, ACCESS Europe, the Amsterdam School for Regional, Transnational and European Studies and the Migration and Inclusion in a Multilingual Europe (MIME) research group, the NEMESIS Jean Monnet Network is organising two panels at the conference “The Politics of Multilingualism” at the University of Amsterdam, 22-24 May 2017.

Both panels deal with

In the context of Russia’s current attempts at the economic and political re-integration of the post-Soviet space, geopolitical discourses stipulating Russia’s civilizational distinctiveness from the West play an important role. Russian culture and language, plus the latter’s historic role as a lingua franca in the region, are important arguments in such discourses. Since the mid-2000s, the Russian state channelled significant financial investment into the spread of Russian through language training and the dissemination of teaching materials.

Offering language courses and showcasing Russian culture is a legitimate cause, yet none of the new Russian organisations makes a secret of targeting their audience specifically in the ‘near abroad’ (the Russian term for the former Soviet republics) in the first place. In this area, the ascription of being a ‘Russian speaker’ has recently been instrumentalised to sustain Russian securitisation claims.

Panel 1: The Russian Language as an Instrument in Russia’s Soft Power Toolbox”

– The role of Russian language in the definition of cultural or political affiliation with Russia, be it in the context of the “law on the compatriots”, in Russian Orthodox parishes abroad or among diaspora and migrant organisations.

– The institutional set-up of Russia’s support of Russian language use and education abroad, in
particular the activities of institutions like Rossotrudnichestvo or foundations like Russkii mir
in Russia’s “near abroad” and further afield.

Panel 2: Russia as a lingua franca and the use of Russian language media

– The legal status and the use of Russian among Russian speaking communities outside the Russian Federation, both within the “near abroad” and further afield (EU member states, Israel);

– Production, dissemination and monitoring of Russian language media (produced in Russia and abroad);

– The role of Russian language media in the mediascapes of countries with significant Russian speaking populations.

Deadline: Please send an abstract of up to 500 words and a short bio (max. 100 words) to
c.u.noack@uva.nl before 15 February 2017. Notification of acceptance will be issued at the end of
February 2017. Final workshop papers are due on 30 April 2017. As we are planning a publication of
the papers in a conference volume, all contributions should be original and not published elsewhere.

A conference fee of €50 covering lunches and a conference dinner applies for all participants at the conference “The Politics of Multilingualism”. Limited funding is available to cover accommodation and travel costs. Please indicate when submitting the abstract if you would like to apply for funding. 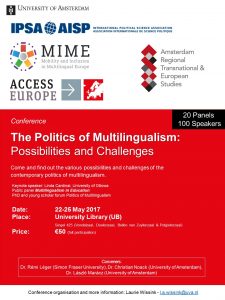 On 22-24 May 2017, the Amsterdam School for Transnational, Regional and European Studies of the Faculty of Humanities of the Universiteit van Amsterdam will host an international conference organized by ARTES (artes.uva.nl), ISPA’s RC50 (rc50.ipsa.org) and MIME (mime-project.org).

In recent years, global trends in migration, trade and overall mobility have continued to transform our objective realities and subjective experiences of linguistic diversity. More broadly, in many countries, the politics of multilingualism have raised new possibilities for collaboration and action as well as challenges to social solidarity and democratic life. In response, scholars in the broad field of language policy and planning have studied language policy choices, linguistic vitality and language revitalization, curriculum development and pedagogies, governing mechanisms and policy instruments, and explored the conditions for linguistic justice in complex societies.

This conference will provide an opportunity to examine and better understand these various possibilities and challenges associated with the contemporary politics of multilingualism. Proposals for individual papers or for panels are invited. We welcome case studies and comparisons, as well as papers adopting a theoretical or normative perspective. Established academics and early-career scholars are invited to submit proposals.

Our keynote speaker will be Dr. Linda Cardinal (University of Ottawa, Canada). Dr. Cardinal is Professor in the School of Political Studies and holder of the Chaire de recherche sur la francophonie canadienne et les politiques publiques at the University of Ottawa. She is one of Canada’s leading experts on language and politics, and her recent comparative work has focused on language regimes and state traditions. Dr. Cardinal is past president of IPSA’s RC50.

Proposals for papers should include full contact details (email address, mailing address, and affiliation) of the author(s) and an abstract of up to 250 words.

Panel proposals must include:

The final deadline for electronic submission of proposals is 20 January 2017. Notices of acceptance will be sent out no later than 15 February 2017. Proposals should be submitted to: l.k.maracz@uva.nl.

Conference registration will cost 50€ for all participants (paper-givers, discussants, chairs and attendees). Looking forward to seeing you in Amsterdam.

The slides of the talks presented in the expert meeting in March, 15, are now available here: